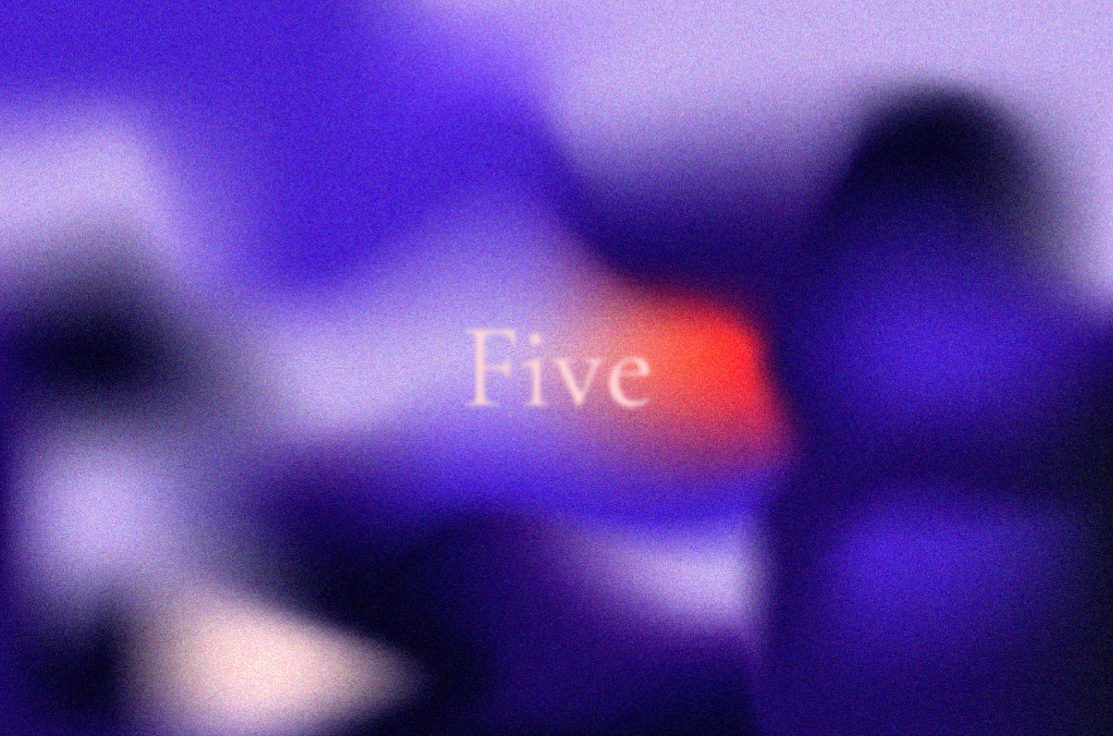 This is how it goes: it’s five years on and apparently grief doesn’t dissipate just because you’ve hit a date that has a permanent title. I announce five years and it does absolutely nothing for the still-present pain of losing my Mum. So I’ve tried to write about it instead – how throughout this year, there’s been a build-up to five, five, five.

It started in Winter. Although it was early in the evening, it was already dark. I looked through the train window, a notebook on the folded-down table in front of me. I’d not written anything yet – it was just open so I could prove to myself that I could write something if I wanted to. I fiddled with my phone.

There was a sudden whooshing noise as another train passed by, the dark of the night making the lit-up windows resonate as though I was being treated to a glimpse into a myriad of lives, like when you look through people’s windows on a Winter evening’s walk. For a flash, a fleeting moment, I saw a woman in the window opposite mine. She had a pile of papers in front of her, dark hair cut short. Then the train blinkered past and was replaced with pressing darkness once again.

The woman cut a striking resemblance to my mum, which was impossible because Mum died years ago. All the same, I sat and obsessed over every detail of that minuscule moment: what if it was Mum? What if she’d just pretended to die and faked the whole thing?

I picked my phone up and texted my friends, watching as messages of sympathy started to ping back through:

By the time the train pulled into Manchester, I was upset. I caught a taxi home and wondered if the pain would ever become easier to handle. If I’d continue to see Mum hidden in plain sight for the rest of my life.

“Mum was our copywriter so-” I stood in my client, Maurice’s kitchen while he washed a mug and he glanced at me. After every work meeting, we had a wind-down conversation and this one had somehow taken a turn for the emotional.

“You worked with your mum at your old agency? How was that?”

I pulled my raincoat over my shoulders and zipped it up while I reflected, “Interesting. I’d ask her to log her time and she would ask me to make sure I got my hair cut. But I-” I picked my backpack up off the floor and slung it over my shoulders, “I appreciated the time with her. In retrospect. Not many people get to have that adult relationship with a parent.”

Maurice walked me to the front door, “that’s how I feel about my dad too. You don’t want to regret that time.”

I still feel like I need to tell everyone:

Mum died on the 21st of October 2015. Coincidentally, that day is my best friend’s birthday and my girlfriend’s birthday, which always makes it a strange day of emotions: of celebration and commiseration.

She had a rare form of cancer, was diagnosed in August and died only ten weeks later. When she was first diagnosed, I wrote bucket lists. I prepped for holidays, that never ended up happening. I sat a lot by Mum’s bedside and played Pokémon on my Nintendo 3DS because I didn’t know how to do practical care. I made a chilli and two stews in the course of a day and took them to Sheffield on the train in two massive plastic carrier bags. Nobody ever ate them.  Before she died, Mum wrote me a letter and I wrote her one too, which is probably the best form of closure you can achieve with someone before losing them.

Whenever I sit down to write, I think of my mum and her own words. It always comes back to grief.

“Close your eyes and imagine hot chocolate. When you’re ready, I want you to bring your support bubble to mind.”

I tapped back and forth on my chest and thought about Lake Windermere and a hot chocolate I drank there. I could envision the day so clearly: a trip taken after a particularly depressive episode last year. I’d taken an urgent week off work after suffering from a series of panic attacks and a visit to my doctors where I was told that being at a permeant level of such high stress was not worth dying for.

I imagined my support bubble surrounding me at the lake – a mixture of people I know in real life, and for some inexplicable reason, Mrs Weasley. I’d struggled to decide who my second maternal figure was and under pressure from my counsellor, had chosen Mrs Weasley as depicted by Julie Walters.

Every time I thought of my support bubble together, all I could think about is how surprised the rest of my team would be to see a fictional character in their midst.

“When you’re ready, open your eyes.”

I’d been doing EMDR for most of 2020 after struggling with my mental health and being diagnosed with PTSD. I’d already done two lots of counselling since losing Mum – mainly using talking therapy and CBT. I always referred to this counselling as building my toolkit – my ways of coping with life’s bashes and bruises. Unfortunately, over the last two years, my toolkit had stopped working because there was so much under the surface that I hadn’t dealt with. Instead I’d take those feelings out in all sorts of ways: bad decisions, alcohol and chaos.

My new counselling was about getting under the surface and investing the time in healing. Once a week I sat down and recalled memories of my mum and then tapped in order to reprocess them. My counsellor described it as taking a messy file and reorganising it into a tidy one, and I couldn’t help but see the entire process as though we were two lawyers, working through files as we tried to crack a case together.

I walked through Tesco this morning and saw a woman who looked like my mum. She was wearing the same heeled boots, same haircut, same trousers and jacket. Embarrassingly, I followed her down a couple of aisles and watched. If her body language was different, if she held herself taller, they would be almost exactly the same from the back. At one point, we intersected, and I walked in front of her. I wanted for her to call after me,

“Meg, what do you want for lunch?”

I willed the woman to say something. Anything. She was silent because she was just a random person grabbing a sandwich on her lunch.

It’s five years on now, and the word five has been pressing into my mind urgently, like a stamp. Five. It feels significant. Anniversaries don’t seem to get easier as much transforming into pointed longevity as you try to comprehend your life without a person. Five.

I thought for a while that I was well and coping with grief. I was coping well because I had the structure to cope well. COVID-19 has pointedly reminded me that I don’t have a mum anymore. When the pandemic started, Mum was definitely the person who would have come up with some form of a plan – and the pandemic aside, there have been so many times in the last year when I would have loved to turn to her and ask for some advice. As it turns out, I don’t just miss my Mum as who I was five years ago. I miss her as the person I’m growing into as well. I miss her in the future versions of who I will become.

There’s a new version of me emerging at the moment. I feel as though I become aware the moment that I start to stray too far from my values – from my path. I’m sort of getting a taste of who I want to be and the life I would like to live. It’s an odd thing to do without the guidance of my mum. I feel as though instead of enjoying the last few years, I’ve been hiding from considerable pain, working through considerable pain. It’s taken me a while to learn how to recognise moments of joy – the right people, the right environments and to cling onto them.

It’s funny that, five years on from her death, I find myself on a career path that’s remarkably similar to my mums, living in a flat that’s only a ten-minute walk from her own first flat. That our different worlds have led us to these similar storylines. It’s comforting to imagine her, thirty years ago, just down the road and whittling away at some work. Perhaps that’s something that I’ll be able to continue carrying with me.

If you’ve read this piece and have a few pounds to spare, please consider donating to St Luke’s Hospice – they provided an incredible standard of care for Mum before she passed away. Imagery by my wonderful pal, Noe Baba.

One response to “Five.”